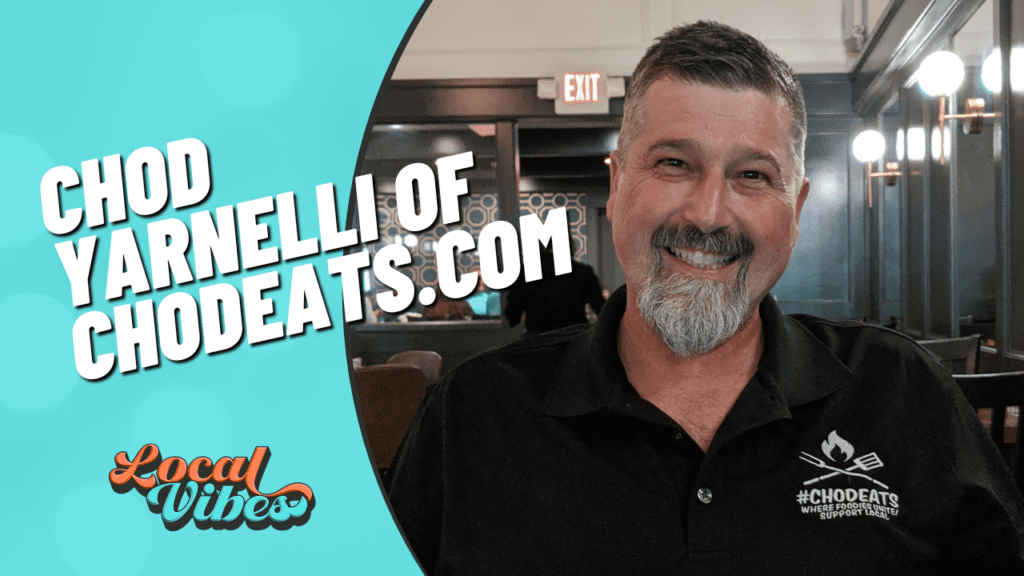 What started as a joke from taking pictures of their food and posting them on Facebook has turned into a foodie powerhouse that is helping save local restaurants by working with them to get the word out and stay relevant during a time that has been extremely tough on the mom and pop shops of the world.

Local foodies Chod Yarnelli, an electrician by trade, and his wife Jodi were in the fun habit of taking pictures of their food and posting them on their social media (as one does😄) until one night during dinner at a local restaurant, Jodi jokingly said, “let’s just start a Facebook group”… and with that #chodeats was born!

Their public group describes itself as a fun loving group of foodies who love to create and share pictures of FOOD and encourage others to do the same.  It went from 0 to 5oo members in no time flat just from sharing it with friends and family.  When it hit 500 Chod decided it was already time to give back and planned an event.  It was supposed to be a picnic…

In the time it took Chod to plan and organize the “picnic” for the little “joke” of a group, it exploded to over 10,000 members and over 35 local restaurants came to be a part of what Chod calls “Licking County’s biggest cookout”!

#chodeats hasn’t stopped growing.  It had 60,000 members when we recorded this episode a few days ago, now at the time of posting this it already has 65,700… and there seems to be no ceiling!  The power of this group of foodies has been felt county wide and is expanding.  Chod used the attention he has grown to help local restaurants band together and get the word out.

Just as with any small, local business marketing is very important but not always in the budget.  Word of mouth works but is very slow and not scalable.  He procured a contract for roadside billboards and grouped 4 restaurants together so they can get the word out and share the cost.  This is a concept I call “competing together”.  Lots of small businesses are too busy fighting against each other and don’t realize they are losing ground to giant franchises.  They, instead, need to band together and work like an association of locals to stay in the game and even grow.

That is where Chod’s sights are now.  Exploring the ever growing ways to help these locals and grow the local vibes.  As he told us, when this first started, he heard about many local restaurants that he’d never even heard of!  Not anymore.  Not with #chodeats and its army of foodies sharing not only photos and recipes of their own creations, but tons of content recommendations for their favorite local establishments.

There is so much more!  Take a listen to the show and hear for yourself how much you can help someone by just stepping up and giving it a shot.  You’ll hear things like how one restaurant owner gave him credit for 70% growth!  His plans for what’s next and how he is already global!

I’m positive that 100k is an easy target and is right around the corner.

You can find Chod here:

Local Vibes with Pat and Angie Cherubini is brought to you by Ultimate Online Marketing where we help small businesses owners, like YOU, get more customers every month without wasting your time or money.

Keep the local vibes alive by joining the free Local Vibes group and engage with our local vibe tribe where we share nothing but good vibes.  Locations, businesses, food, cocktails, events, and more.  We are syndicated just about everywhere to make it easy to watch and listen any way you want.

Bronze:  Get started with Ultimate Online Marketing for FREE at   https://localvibes.us/bronze

Gold:  Get your own marketing and sales system at https://localvibes.us/gold

Platinum: Partner with our agency to scale higher and faster! https://localvibes.us/platinum